Clash of Clans is a free mobile MMO (massive multiplayer online) video game launched in 2012 by Supercell. I’ve been playing for a little over a year now, and it can be extremely fun, but also very frustrating at times. To help some of you avoid that frustration, and bypass a lot of the trial and error I experienced I put together this quick list of the top 5 beginner tips. Hope you find them useful!

When I say a “good clan” I don’t necessarily mean one with a high rank or a ton of members. These can be indicators of good clans, but there are much more important factors when joining up. When you look at a clan’s profile check out the ratio of troops donated to troops received, especially for the top 5 members in the clan. These members should be passing down strong troops to the lower ranked clansmen in large amounts. This is a good indicator that the strongest in the clan are willing to help you become stronger, this is a clan-centric mentality, and it’s what you want to seek out. But remember donation counts reset to zero every two weeks, so if the numbers are all consistently low, you may need to wait a few days to make this type of judgement call.

Another indicator you want to watch is the clan chat once you are in, how do the clan members communicate? Are they helpful, do they provide useful and insightful advice, or do they ridicule and belittle new players? This may seem like common sense, but many people tend to stick it out in high level clans who have no interest in helping newer players simply because they perceive some type of advantage to doing so. If they are a bunch of jerks, who only care about themselves, dump them and move on.

I was lucky enough to find a clan with two leaders who donate high level troops by the hundreds per week, and provide valuable advise whenever asked.

4. Farm and Raid, rinse and repeat

In short have a balanced approach, get as much gold, elixir, and dark elixir as you possibly can. The best way to do so is by raiding and farming at the same time. 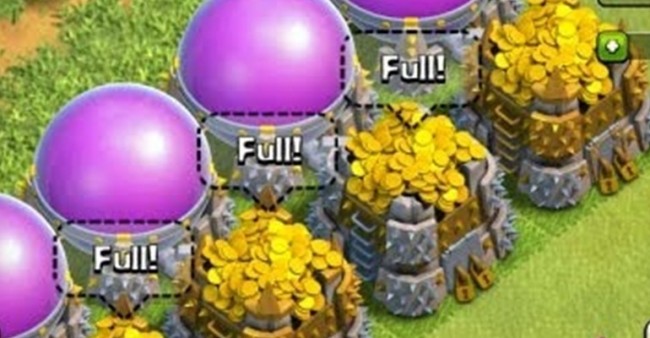 3. Max Out for your Town Hall Level

This was a tough lesson for me, and takes patients to stick to but in the end you will be glad you did. Resist the temptation to upgrade your Town Hall as far as you can before maxing out your buildings, defenses walls, and troops. I’ve seen so many players with level 10 Town Hall’s, and level 5/6/7 walls it’s makes me wonder if they are intent on frustrating themselves.

In a war situation this also puts you at a disadvantage, your base will be ranked at a higher level than your troops or defense should be simply because of your Town Hall level. Trust me, you don’t want to be the number 2 in your clan who constantly gets 3 starred in war, and can barely collect 2 stars from the other clan’s low ranking members. It’s just embarrassing.

It is a slow process collecting gems, and they are certainly expensive to purchase $20 will get you 2500 of them, which won’t get you very far. I’d suggest saving them up for special occasions, Supercell will offer resource collector boosts for 1 gem each at certain times (like game updates, and holidays) which you don’t want to miss out on. It can also be tough to complete your last few upgrades for a Town Hall level at times, in those cases I usually buy a week long shield, and boost my collectors so I can finish up strong.

Other’s in my clan swear by boosting their troop production so they can raid more often, which is another very good use of Gems. I personally don’t use them to buy resources, the cost to fill your gold/elixir/dark elixir storage is just too high. You are better off raiding more, so use those hard earned gems as wisely as you can.

DO NOT USE EXPENSIVE TROOPS TO RAID, this is one mistake I see almost daily. What good is collecting 100k in elixir if it cost 150k to get it? Use barbarians, archers, and goblins to attack full and exposed resource collectors for maximum return on investment. I use them in that order, barbarians to draw fire from defenses, archers to sit back and destroy collectors at a distance, and goblins to finish the collectors off while the defenses are busy.

On occasion I’ll also use a lightening spell to take out troublesome defenses like mortars which use area splash to destroy large groups of troops at once. I reserve that for when large amounts of resources are on the line, those spells can get expensive.

It may take a while to find a suitable village to raid, but don’t worry about that too much, it is better to spend a few thousand in gold to find a big score, than to raid a village and get nearly nothing in return.